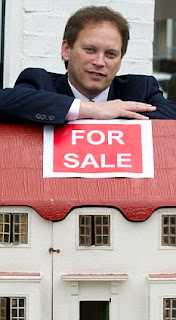 The latest nonsense to issue from the mouth of a Con-Dem minister has left me agitated, not to say irritated!

The Daily Mail of 13th October reported Grant Shapps’, the Housing Minister, speech to the Housing Market Intelligence conference. Read in full here http://bit.ly/dpGL4K if you are suffering from low blood pressure.

He stated: “...middle class families ... should not rely on their homes to fund retirement”. We have had a Labour Government mount a several billion pound raid on pension funds, a stock market lose our pension funds a fortune and now we have a Tory telling us that property as a pension is a mortal sin! I suppose if you are an MP or a senior civil servant then you won’t need to worry about the investment in your property as you have a gold plated, brass constructed pension that the middle-classes have, and are still being asked, to fund from their heavily taxed income, whilst paying into their poorly performing personal pension schemes.

Someone quoted the ‘middle classes’ as wanting falling prices to enable their offspring to get a foot on the property owning ladder. These would be the same people funding the 20% plus deposits required by lenders these days. Where are they doing that from? Personal savings? or from re-mortgaging the properties they have paid, or have  virtually paid, off loans on. Announcing that government policy will actively seek to erode prices is unthinkable!

The conference was also treated to a suggestion that Building Regulations will be relaxed to make the construction of more new homes easier. What? The reason the UK only built 142,000 new homes last year was because builders went out of business and those that remained managed to rein in their construction to match demand. The building / property industry is governed by supply and demand. To spell it out:  Low demand = reduced supply! No mortgage funds at reasonable loan-to-value ratios = No buyers!

If the government starts to talk about major cutbacks, unemployment in the public and private sectors in July but also says it won’t actually announce the detail until the 20th October then it will produce a property market that has stalled.

The reports coming out of the recent Conservative party conference have sounded like a party using the platform as a sounding board for it’s proposals but at the same time feeding a Public looking for a lead and positivity with more to fear and worry about. To paraphrase Franklin D Roosevelt: “Only Thing We Have to Fear Is Fear Itself” . Oddly enough he made this comment during the USA’s 1932 elections when the depression reached it’s depth in 1933.

Another of Mr Shapps’ proposals is to help the market by holding interest rates down. Low rates are what are preventing repossessions increasing. They are not helping first time buyers as they don’t have access to the lower rates unless they have large deposit funds available to them. House prices fell after October 2007 and throughout 2008 by as much as +/- 20% which has made them attractive to first time buyers. Then the lenders, under the cover of “more responsible lending” doubled the deposit required. In common with many 50+ year olds we bought our first house at the age of 22 with a 10% deposit that we had saved and cobbled together. It was bought as a first ‘home’. Mr Shapps then states: ‘Calling for an end to the ‘lottery’ of the housing market, he said: People should think of homes as a place to live rather than a pension’

Well, the news is the vast majority of this country’s home buyers buy their property with this uppermost in their minds. The idea of buying is to end up mortgage free and at the same time rent free. The continuing remark was “buying a house shouldn’t be like playing the lottery”. Short term profit taking is the reserve of a small minority and professional developers. I think he is trying to say that people should not suffer market highs and lows, but that is not a reason for attempting to create a market that is permanently flat.

He has obviously touched a nerve as the Mail Online version of the article had attracted 327 comments by the 14th October! We are all, with a minority exception, looking at a pension short-fall and now they want to take away the ability of a large majority (bearing in mind 60+% home ownership) to add funds from their property that they have personally paid for.

January 07, 2011
SimplyBusiness.co.uk report on the Changing Face of Britain’s Landlords as Young Entrepreneurs enter the Market Analysis from SimplyBusiness.co.uk has indicated a significant change in both the age and gender of private landlords in the UK. The traditional face of the archetypal British landlord is changing according to the study which shows there is a new, younger breed of landlord entering the private rental market; which would indicate that when it comes to property, many still think that there’s money to be made. Comparative data of landlord insurance policies sold by SimplyBusiness.co.uk in 2006 (versus 2010) shows a marked increase in landlords aged 18-34. Likewise the gender gap is beginning to close as 39% of landlords insured via SimplyBusiness.co.uk are female, versus 36% in 2006. Interestingly, when comparing the types of property being insured, there hasn’t been a statistically significant change since 2006 with terraced housing still accounting for the largest
Post a Comment
Read more

November 25, 2019
CHRISTMAS 2019   The festive season is not far off and we just wanted to take this opportunity to confirm our opening hours over the Christmas holiday period and also to outline a few procedures: We will close for the holiday period at   Midday on 23rd December . Opening on   27th and 28th December between 9am and 1pm . We will open normally from   2nd January 2020 at 09.00 . Day to day issues which could wait until normal office hours resume on the   2nd January 2020 , should be reported then.   Our contractors may be on call but many of their suppliers close down over the Christmas period so parts can be hard to locate. We will not attend any “lockouts” over the Christmas break but can pass on the details of a good local locksmith if this occurs – the cost of which will, of course, be yours. A small request   – if you have   any   problems with your heating and hot water now or maybe an appliance that is a bit temperamental and you have been meaning to report the
Post a Comment
Read more

April 23, 2020
It seems hard to believe that this COVID19 situation has been with us for just over 4 weeks. It actually feels like at least 2 months. If you can bear to watch the daily briefings from the government without reaching for a razor blade then you will be hearing that, just maybe, we are reaching the apex of the death rate curve and, just maybe,  there will be a relaxation of movement and a return to economic activity by most of us, subject to social distancing, masks etc. From a property market point of view, I've been decrying the gloom merchants who have been talking about 16% price falls. This is for reasons that beyond economics, people go their own way and predicting human sentiment to situations is not an exact science. I came across this article by a well-respected commentator called Roger Martin-Fagg who seems to see things my way - or I see things his way!  You have the time available so I recommend that if you want a spoonful of positivity then read this post: https:
Post a Comment
Read more