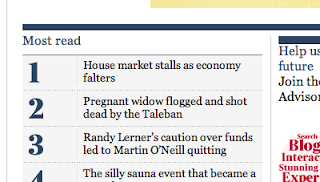 Todays Times headline has sent shivers through the property owning classes as they think that the economy is ‘stuttering’ and house prices are stalling/falling again.

It’s August - this country’s main school holiday month - and whilst large numbers of us are not jumping on airplanes to Spain or sunny places as (not being heavily bonused bankers)our budget won’t stretch to it, we are in the majority ‘on holiday’.

Since I became an estate agent in 1979 the late summer has always been slow in terms of sales and new instructions. I have never had a best ever sales month in August. Now, add into this the Cameron/Osborne/Clegg effect and you have the perfect recipe for a seriously depressed property market.

Forgive me but I have to say politicians never learn from past mistakes.

Whilst waiting in a queue outside a Pork butchers the other Saturday morning I made the mistake of passing the time of day with the gentleman in front of me. He asked what I did for a living, as I had commented that I would like a queue like the butcher’s outside my premises, and when I replied “estate agent” he said “You lot deserve all you get!”

Getting to the point, our politicians do things like announcing the end of dual tax relief then waiting 6 months before implementing it. They announce reducing and cutting the public sector, then leave it until the autumn before actually doing it. So therefore we deserve what we get - a market where everyone employed by government or who gets any proportion of their work from government, decides not to spend anything they don’t have to until they know where they stand. I believe this is the root cause of the mixed messages about house prices and the state of the market we are currently hearing.

January 07, 2011
SimplyBusiness.co.uk report on the Changing Face of Britain’s Landlords as Young Entrepreneurs enter the Market Analysis from SimplyBusiness.co.uk has indicated a significant change in both the age and gender of private landlords in the UK. The traditional face of the archetypal British landlord is changing according to the study which shows there is a new, younger breed of landlord entering the private rental market; which would indicate that when it comes to property, many still think that there’s money to be made. Comparative data of landlord insurance policies sold by SimplyBusiness.co.uk in 2006 (versus 2010) shows a marked increase in landlords aged 18-34. Likewise the gender gap is beginning to close as 39% of landlords insured via SimplyBusiness.co.uk are female, versus 36% in 2006. Interestingly, when comparing the types of property being insured, there hasn’t been a statistically significant change since 2006 with terraced housing still accounting for the largest
Post a Comment
Read more

November 25, 2019
CHRISTMAS 2019   The festive season is not far off and we just wanted to take this opportunity to confirm our opening hours over the Christmas holiday period and also to outline a few procedures: We will close for the holiday period at   Midday on 23rd December . Opening on   27th and 28th December between 9am and 1pm . We will open normally from   2nd January 2020 at 09.00 . Day to day issues which could wait until normal office hours resume on the   2nd January 2020 , should be reported then.   Our contractors may be on call but many of their suppliers close down over the Christmas period so parts can be hard to locate. We will not attend any “lockouts” over the Christmas break but can pass on the details of a good local locksmith if this occurs – the cost of which will, of course, be yours. A small request   – if you have   any   problems with your heating and hot water now or maybe an appliance that is a bit temperamental and you have been meaning to report the
Post a Comment
Read more

April 23, 2020
It seems hard to believe that this COVID19 situation has been with us for just over 4 weeks. It actually feels like at least 2 months. If you can bear to watch the daily briefings from the government without reaching for a razor blade then you will be hearing that, just maybe, we are reaching the apex of the death rate curve and, just maybe,  there will be a relaxation of movement and a return to economic activity by most of us, subject to social distancing, masks etc. From a property market point of view, I've been decrying the gloom merchants who have been talking about 16% price falls. This is for reasons that beyond economics, people go their own way and predicting human sentiment to situations is not an exact science. I came across this article by a well-respected commentator called Roger Martin-Fagg who seems to see things my way - or I see things his way!  You have the time available so I recommend that if you want a spoonful of positivity then read this post: https:
Post a Comment
Read more