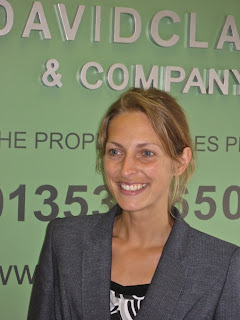 thought it was about time that I introduced myself! I am Susannah, the new addition to David Clark’s sales team. I have worked in the property industry for a few years now but mostly selling new build properties. Moving back in to estate agency has definitely been the “rightmove” It is coming up to end of my second week, despite the incident that I had on my second day! One always likes to make a good impression when you start a new job; however making an impression on the company car was not what I had in mind!

The day had started so well, I was brimmed with enthusiasm and eagerness, but unfortunately that keenness managed to spill over! I had my first two viewings, I was meeting the potential purchasers at the properties, I had the keys, their contact details, and particulars…I had all areas covered. As I approached the thickly covered gravelled car park, where the unsuspecting Toyota Yaris was waiting, the sun was shining the air was fresh and sound of birdsong made me smile. The calm before the storm!

The car park was so full I knew that a few manoeuvres were going to be needed. In reverse and off I go, well all of two yards! Don’t ask me how but somehow with a combination of my over zealous reversing and the thick gravel I got the car completely and utterly stuck! That wasn’t all; I was on the verge of a steep decent. I couldn’t go forward and I couldn’t go back! Time was ticking, I needed to get to the first viewing. I made an executive decision and left the car, hot footed it down Lisle Lane, well as hot as possible in four inch heels, and got my car. I arrived for the viewing, rather flustered but I put the car to the back of my mind and had a successful viewing.

After the viewing I called Barbara back at the office to let her know what had happened, David was still out on an appointment. She was very reassuring and said we would sort it out when I got back. Off to the second viewing. I arrived and greeted the potential purchaser, really lovely lady and her adorable Labrador. You might have heard the expression “When you’ve got to go you’ve got to go” Lets just say so had the dog. Lucky a bag was handy! The viewing was complete and time to head back and face the music…I was either going to be dancing with relief or sliding my feet with further embarrassment. I was the latter, that car was stuck good and proper!

Barbara called her husband, who came to the rescue. However it was even beyond him. He needed to enlist the help of a nearby shopkeeper to actually attach a rope and pull the car out! Thank goodness, now all I had to hope was that there was no damage. Oh and the other detail was that I hadn’t told David what I had done! There was a last minute viewing that I needed to get to so the explanation was on hold. Back to the property where we had the earlier deposit from our four legged friend and nowhere to park! So some blisters later I made it there and the viewing went well. It was now gone 6.30pm so I decided to call it a day and chat to David in the morning, face to face! However I had one last surprise. Just as I got back to the car I felt something land on my head…I was left a souvenir from a passing pigeon! Perhaps it thought I needed some luck! Well I am still here to tell the tale!

October 14, 2009
I can remember back in 1990/91 when I was with the forerunner of this firm (my god that's nearly 20 years ago!) that we were in the middle of a property market down turn that I personally believe was far worse than the current one. Osbornes Property Services as we were then called was suffering from a serious lack of income that also had a root in a serious lack of good saleable property to sell.

We were new, very professional, very keen, very hardworking and very keen to please but no one had heard of us. Our marketing budget was limited - we were skint to be truthful! What did we do? Well we set about making people aware of us by 'canvassing'. I wrote letters to other agents vendors, I dropped leaflets, we advertised as imaginatively as possible saying that even in that market we needed property for sale. Did it work? Yes to a degree and we certainly wound up some of the more established local estate agents who were not keen to lose instructions to newcomers like us.

June 04, 2013
I have just returned from hospital having had a procedure carried out on my foot/ankle that involves repairing a damaged tendon and realigning my foot by breaking my heel! While waiting to be called down to theatre I sat in my room checking e-mails - as you do when you want to take your mind off things.

There was an e-mail from Colin Clayton of Desk Centre Limited http://www.deskcentre.co.uk talking about a £10,000 office refit and all I had to do was create a blog post suggesting why my office should be the one to receive it! What an opportunity - here I am laid up for two weeks before I can mobilise on crutches and my office certainly would benefit from a revamp in 2013.

Like most surviving, small, independent estate agents we have done this by cutting costs, reducing premises and regrettably letting staff go. Our address used to be 20-22 Market Place but is now 20 Market Place only. We originally moved to No.20 from our first premises in Newnham Street in 1993- my then business par…
Post a Comment
Read more